» How the hell did you get here? ~ Valentine

» In sickness and more (Sean)

:: Omegnen rundt om Doomsville City :: The Valley Of The Dead

Mazikeen and the bulk of her mercenaries forces, had reached the ramparts.
Their quick and decisive arrival, brought much needed reinforcement to the Avian Brigade and the TunnL Betallion,
which had been inside the walls for an considerable amount of time,
sowing chaos and maintaining disorder amoungst the Dark Jewels defenders.

But while Mazikeens warrior spirit
and wrath fueled fighting-style encourged her to fight in the courtyard,
she left her burly troops behind in the open fortress square,
so she could find Murkmaw the villa fortress owner,
and deal with him personally.

she did not seek him out, due to spite,
but because tactically, she did not know if he had an escape plan,
in case of his fortress defenses being breached,
and since his death was the entire point of coming here,
him escaping through a tunnel or through magic,
was not something she could allow.

So while Slaught mercenaries was keeping the main guard force busy,
she with a smaller team of handpicked Slaught veterans,
entered through the obsidian gates, from the dreaded courtyard, into the prestine villa interior.

She expected to hunt down Rotley Murkmaw,
by flipping fancy couches to find the squirming worm.
but Rotley had made himself more available for finding, than expected.

because once the big gate was forcefully opened, and her small legion of soldiers bursted through,
they did not find a lineformation of defenders or a dimly lit entrance hall,
but instead a gloriously lit and luxurious banquet room.

A live music band in nothing but the finest og clothing treads, decoraded with golden lined-fabric,
stood off to the side and played sophisticated and calm violin music.

In the middle of the room was 8 long tables with everything from sweet desserts to spicy roasted meats of all kinds. a big and welcoming buffet.

the floor was covered newly cleaned stone titles of different rock types, that Mazikeen in all of her travels have never seen before. It was like standing on a gallery of mineral rock deposits.

moseric depicting demons fighting angels in fantastic hand-to-hand fights, covered the entirety of the roof.
The moseric was slightly glowing, indicating some sort of light sources was hidden above it.
but the glowing of the moseric was locallized and stylish,
to mostly be in the red eyes of demons or the shining of the angels wings, to flair up the moseric.

Rotley stood atop a staircase, with a big wooden door behind him.

Mazikeen was not interested in Rotley escaping thorugh the door into an unknown room,
before her and her comrades could make it up the staircase,
so she attempted to stall him with talk and prehaps surrender.
but she walked towards the staircase in a calm and stoic manner, to not rattle him,
giving her the biggest advangae she could get.

"Give up Murkmaw! We have decimated your forces"

Rotley rose his glass filled with a unmistakingly red liquid, to his vampyric lips.
He remained refined in his posture and dressed as finely as a king.

the mans eloquent and linguistically perfect analysis of Mazikeens threat, did not amuse her.

"Be smug all you want, but you are out of tricks"

Rotley with a self indulgent selfish smile, laughed through his condersenting gaze,

"You appear etymologically-challenged. Let this old machiavellian define -trick-
1. A cunning act or scheme intended to deceive or outwit someone.
or
2. a peculiar or characteristic habit or mannerism.
In either case. You are incorrect.
Cunning schemes and characteristic habits are resources in which I find myself in no short supply

with the last sentence, Mazikeen had reached the first step of the stairs and ran vigorously in Rotleys direction.
as Mazikeen moved faster, so did her people, rushing to catch the vampire at the top of the stairs.

"Exhibit A-"
Rotley said while gesturing to the door behind him.
Mazikeen had at this moment, reach the top of the stairs.
She extended her arm. reaching for his gentleman shirts exquisite collar.
but before her fingers could get a hold on him,
the door behind him busted open, and the wooden planks was split into thousands of small splinter projectiles.
Mazikeen covered her face with her reaching arm, but would still feel tens of small fragments enter her exposed skin.

Rotley stood unscaved and as prestigious as ever.
All he had to do was the smallest, most coordinated movements,
he took a sip from his glass as the disorianting amount of wood fragments was hurled all around him.

but either by luck. magic. skill or practice. he stood untouched.

Mazikeen might be in pain, but nothing she could not handle,
and nothing that shock her off her balance,
and the moving arm was merely impeded in its travel towards Rotley,
not entirely stopped.
but before Mazi could reengage her plan of grapping Murkmaw,
the beasts responsible of wrecking the door, was revealed.

a big Savarosi tusk-hound jumped from within the unknown room, into Mazikeens plated body.
the weight of the beast and the momentum of its leap, had Mazikeen fall down from he elevated platform.

She landed on one of the giant tables filled with food. had her back completely mush a cake,
so the cream and jam was squeezed allover the surface beneath her, and she was laying in a pool of sugar treat.

The hound above her had more muscles than fat.
it had a huge gabing maw with two big tusks.
Its back was covered in small patches of fur, making it neither entirely fur covered or entirely skin.

It was black in tone, and had deep yellow enraged eyes.

Mazikeen could almost feel its rugged teeth taking a violent hold around her face,
but her loyal soldiers charged over and gripped the beast by the tail and legs. violently tugging at it, attemping to get it off her.

Mazikeen with her fist clunched around her swords hilt, directed the blade towards the smell of stench and poor dental hygiene.
her broad swords pierced the maw of tusk-hound.

she could hear a squeal of displeasure, as she plunged the steel deeper and deeper into the howling beast.
The beast tried to move but the Slaught members fixed it in place, forcing it to endure the deadly stab.

The beast quickly died.
and laid flat on Mazikeen, draining her of air. but with the help of her veteran soldiers,
the beast was removed.

Mazikeen look at Rotleys last known location, expecting him to have used the distracion to escape.
but he stood. confident and unsurprised.

"We killed your pet"

A bellowing roar came from behind another door. a door standing on the far end of the large room.
this door was huge, the size of dragon....
Mazikeen suddenly recognized the kind of roar it was. 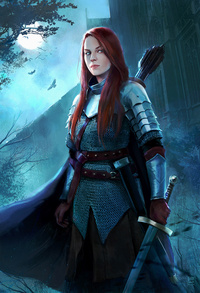 :: Omegnen rundt om Doomsville City :: The Valley Of The Dead